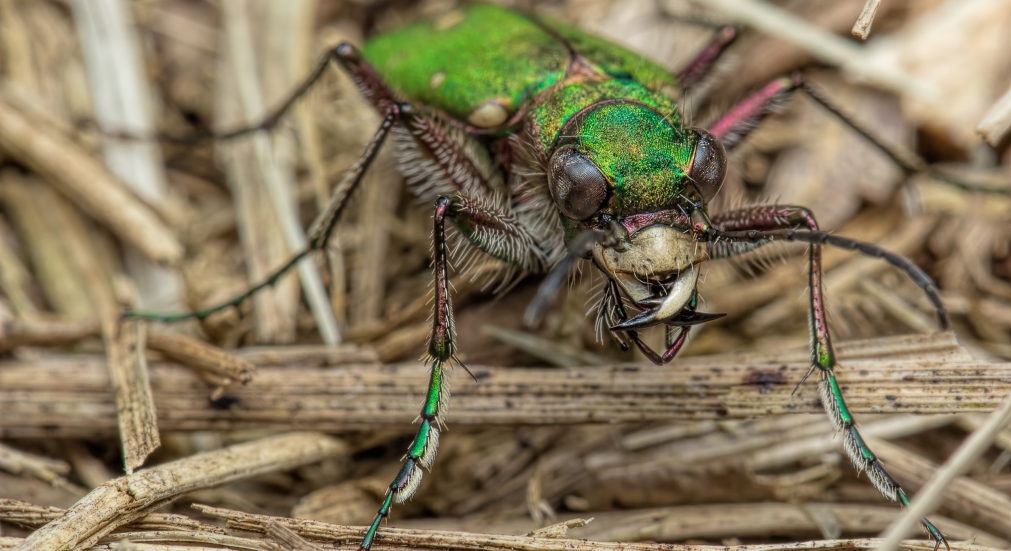 Often called “The Tiger of the Mosses”, the green tiger beetle (Cicindela campetris), is one of the fastest insects on the planet. ​Tiger beetles live on heathlands and sand dunes, but in Shropshire, you can see them on the Marches Mosses from April to September – in those moments when they’re not chasing their prey on foot. Completely carnivorous, these beetles make their dinner of spiders, ants and caterpillars that they actively stalk, pursue and capture. Like other beetles, they need clean, healthy places to live and they are a good indicator of good quality habitat.

At only 1.5-2.5cm in length, they’re small but easily recognisable by their dazzling emerald green body with large creamy spots on their wing cases, bright red legs and large eyes. You might find them on bare ground in bright, sunny conditions. They like the warmth on their legs because it helps them to run faster!

Green tiger beetles have ferociously strong jaws, each with several sharp teeth. They will fly a short distance if disturbed, but will then turn around a face their attacker, ready to fight.

These spectacular creatures have a two-year life cycle with a complete metamorphosis. The female lays eggs in June or early July, singly on the ground. Each larva constructs its own underground burrow where they stay for up to a year.

The larvae are odd looking creatures with a large head, impressive jaws and strange hook-like structures on their back that help to anchor the larva in its burrow. When the larval tiger beetle spots prey, it springs from its burrow like a jack-in-the-box, impales the prey and drags it back into the burrow to feast on. After a year, the larva enters its pupal stage, emerging a month later as the brilliant green adult tiger beetle we can see on the Mosses.

So when you’re out for a walk on the Mosses, keep your eyes open for these very interesting creatures – but try to keep your fingers and toes from resembling their dinner. ​But don’t worry, you are much more likely to be bitten by a mosquito when you’re walking on the Mosses – there have been no reports of tiger attacks in the area in recorded history!