Great Grey Shrike on the Mosses 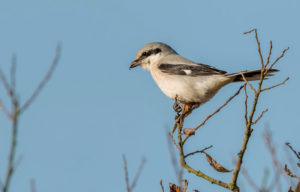 The great grey shrike (Lanius excubitor) has been spotted on Fenn’s, Whixall and Bettisfield Mosses. They’ll soon be returning to their Scandinavian breeding grounds, after spending the winter hunting over the Mosses.

A medium-sized bird, the great grey shrike is black and grey with a white underbelly, a black band across its eyes and a long tail. Perched on tall posts and treetops, shrikes use their hawk-like hunting technique to swoop down and catch their prey, generally insects and small birds and animals. Shrikes may impale their catch on a thorn or spike to save them for later, earning their nickname of “the butcher bird”.

On the Mosses, you may hear the shrikes’ call, a harsh “sheck, sheck” or an occasional song – a low-pitched warble with some harsher notes. They will sometimes imitate other birds’ songs as well.

Shrikes make their nests of dry grass, moss and twigs that they line with roots, wool and feathers, creating a warm home for their young. Breeding pairs produce one brood per year of five to seven greenish-white, darkly marked eggs. After a 15-day incubation period, both parents look after the brood; the young leave the nest when they are about 20 days old.

Shrikes are protected by the Wildlife and Countryside Act 1981. Birdwatchers estimate that around 60 birds overwinter in wetlands including the Marches Mosses and another 125 or so pass through Britain on their way to other winter locations.

A Brief Background of the Mosses

The Marches Mosses – Fenn’s, Whixall, Bettisfield and Wem Mosses – make up the third largest lowland raised bog in Britain, a Site of Special Scientific Interest (SSSI) and a European Special Area of Conservation (SAC). This peatland was formed over 12,000 years ago when Sphagnum moss began to grow in the wetland formed by the retreat of glaciers. The Sphagnum acidified the water, stopping the decay of plant remains. These built up like a sponge to form the raised expanse of the peat moss, with the pickled water creating an environment suitable for the unique combination of plants and animals that thrive here.

In 1990 the peatland was acquired as a National Nature Reserve (NNR) and restoration was begun. This has led to an increase in biodiversity as plants and animals that thrive in the boggy conditions return. Repair of the peat has meant an increase in the store of carbon. Because peat stores more carbon than plants, trees and other types of soil, the Mosses are an important weapon in the fight against climate change.