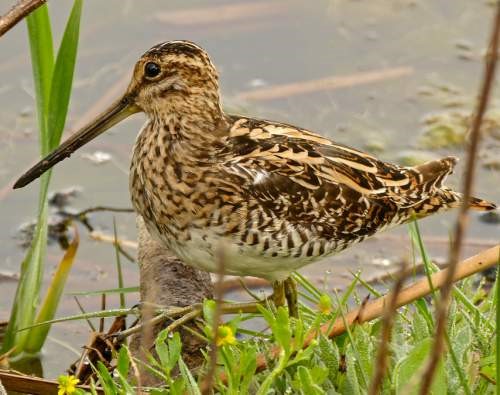 Snipe (Gallinago gallinago) have been found breeding on the Whixall Moss area of the Marches Mosses National Nature Reserve, near Whitchurch in North Shropshire. The UK population of snipe has undergone a big decline in the last twenty-five years. The RSPB records it as an Amber List species, which means it is endangered and of international importance. Snipe are protected by the Wildlife and Countryside Act 1981 and have been included in the Biodiversity Action Plan since 2002.

This exciting news about snipe returning to Whixall Moss has been featured on BBC Radio Shropshire, the Whitchurch Herald and the Shropshire Star, making the sighting of the rare breed county-wide news and pointing out again the value of the Marches Mosses as a site of great bio-diversity and a store of carbon in the fight against the climate crisis.

The natural habitat of snipe, which are secretive and elusive, is wet marshy settings, including bogs. They avoid settling in areas with dense vegetation, preferring patchy cover at the marshes edge which lets them hide from predators. Work by the BogLIFE project to regenerate the Mosses by installing bunding that raise the water levels on the peat, the Marches Mosses have again become the ideal habitat for snipe. This is underlined by the Mosses designation as a Ramsar site – a wetland of international importance – as well as a Special Area of Conservation (SAC) and an SSSI location.

Leo Smith, editor of the recently-published Birds of Shropshire, and organiser of the county-wide Breeding Snipe Survey said, “These 2017-19 records are the first with evidence of breeding snipe from Whixall Moss since 1995. We only found evidence of 10 breeding pairs in the whole of Shropshire in 2019, so finding them again at Whixall is very welcome.

“All the records have come from three areas where small embankments have been built to hold the water close to the surface as part of the BogLIFE restoration project. This has caused the creation of shallow pools, ideal snipe habitat. If these records herald a recolonization of the Mosses by breeding snipe, this will be a great achievement for the National Nature Reserve and an excellent result for the BogLIFE Project.”

Snipe are ground nesting birds, like the curlew and lapwing which also breed on the Mosses and can be threatened by disturbance. Reserve Manager Steve Dobbin said, “We ask dog walkers to keep their pets on a lead in the areas where birds are nesting, so it was heartening that dog walkers reported some of the first evidence of the return of these endangered birds. The Marches Mosses are a unique landscape, home to many rare and endangered species and while dog walkers are welcomed, we ask them to respect the necessary restrictions.”

Ground nesting birds are particularly vulnerable to disturbance. A dog off a lead, ‘doing what dogs do’ nosing and exploring a little way off the main track may look harmless to owners. However, the unfortunate effect can be to flush birds from their hidden nests and prevent them from settling – thus leaving their eggs unattended and exposed. The cumulative impacts of this are:

The other ground dwelling species on the Marches Mosses are lapwings and curlew, both of which are on the Red List of endangered species.

You can read more about visiting the Mosses with your dog here: Visiting with Dogs.

Snipe are small birds, only 23-28cm long, standing on short legs and weighing 80-120 grams. Their wingspan is generally 39-45cm. The most notable feature of snipe, their long bill, is a full one-quarter of the total length of the bird. It is flexible and very sensitive, detecting and the worms and other invertebrates that snipe dig out to feed on.

Male snipe courtship displays are amazing. Called drumming, the birds soar several hundred feet in the air, then dive downward, making an iconic plaintive, beating sound. They do this by rapidly spreading their wings and spreading their outer tail feathers to create the sound by vibration. If you listen closely, you can hear this snipe sound here:

Other snipe calls include a “chippa-chippa-chippa” sound they make in the spring and, to raise the alarm, a “scaap” sound.

In their well-hidden ground nests, the female lays and incubates a clutch of four eggs – pale, greenish-brown with dark brown splotches.  Both parents feed the young, which are dark with white speckles.  Young snipe begin to fly when they are about three weeks old.

Snipe live across northern Europe, particularly in the wider Scandinavian area known as Fennoscandia. They head to western and southern Europe, including Britain, in winter. Their autumn passage to the UK begins in July, peaking in October. After overwintering, snipe start their return journey north between February and May.

Snipe have a long history in Shropshire, having first been noted in the 17th century. In 1789, Fenn’s, Whixall and Wem Mosses were known breeding sites. Snipe were still well known in the boggy areas around Shrewsbury in the 19th century, but by the end of that century had become relatively uncommon. By the second half of the 20th century, snipe were no longer found in many of the places they’d been noted at earlier. The RSPB and the British Trust for Ornithology (BTO) estimate the snipe population has decreased by some 74% between 1970 and the end of the 20th century. Drainage appears to be the main cause of the decline of snipe in this area, along with shooting in earlier eras, and increased predation.

A Brief Background of the Mosses

The Marches Mosses – Fenn’s, Whixall, Bettisfield and Wem Mosses – make up the third largest lowland raised bog in Britain, a Site of Special Scientific Interest, a European Special Area of Conservation and a Ramsar site. This peatland was formed over 12,000 years ago when Sphagnum moss began to grow in the wetland formed by the retreat of glaciers. The Sphagnum acidified the water, stopping the decay of plant remains. These built up like a sponge to form the raised expanse of the peatmoss, with the pickled water creating an environment suitable for the unique combination of plants and animals that thrive here.

Peatlands depend on retaining rainwater for their existence. The Marches Mosses began to collapse when the bog was drained over several hundred years, the dried peat was cut for fuel and agricultural and horticultural use, and the edge habitat around the Moss was turned into farmland. The decay of the peat meant that carbon that had been stored for millennia was being lost and by the late 1980s the Mosses were badly damaged.