Brimstones on the Marches Mosses 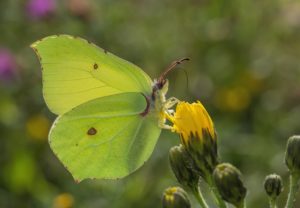 Fire and brimstone? Or a beautiful soft yellow butterfly? One heralds the wrath of the heavens, the other ushers in spring in the UK.

It’s the brimstone butterfly, of course, that arrives on the Marches Mosses this time of year.  In Shropshire, brimstones have been seen as early as 15th March, or as late as the 8th of April. They are often the last butterflies seen in the autumn, frequently as late as November.

Brimstones are yellow in colour; the upper wings of the male are a stronger sulphur colour than those of the female, and both have an orange spot on each wing and pale yellow undersides. Their wingspan is about 55-60mm (2 ¼”). This colouring means they can blend into their surroundings for protection. The veins on their wings are pronounced, perhaps to mimic the veins on ivy leaves where they hibernate through the winter. Brimstones can live for up to a year.

Brimstones lay their yellow-coloured eggs singly, and in one generation per year.  They lay their eggs near the leaf tips of tender alder buckthorn (Frangula alnus), which is plentiful on the carr – the wet woodland – around the Mosses, as well as along the disused railway that runs through the western part of the Moss.

The eggs hatch in about 10 days. The caterpillar emerges and feeds only on alder leaves, taking on the same shade of green as the leaves. It can be mistaken for the caterpillar of small whites. The brimstone chrysalis is green, attached to a leaf stem by a silk pad and girdle, from which the butterfly emerges after 10 -14 days.

These gorgeous yellow butterflies are the chief pollinator of primroses (Primula vulgaris). , Because primroses have an unusual arrangement of male and female flowers on the same plant, known as pin and thrum, Brimstones need their long tongues to reach the primroses’ nectar.

The brimstone collects pollen from the thrum flower as it reaches down for the nectar, and then deposits the pollen on another flower; if that’s a pin flower, the pollen lands on the style, pollinating the flower. Thus, brimstones ensure the cross pollination of the primroses, as they can’t self-pollinate.

The name brimstone was first used in the 12th century, coming from the Middle English “brinston”; that is, “birnen” meaning “to burn” and “ston” for “stone”.  It’s an archaic term for sulphur, evoking the odor of sulphur dioxide that comes with lightning strikces.

But the connection between brimstone butterflies and the English language doesn’t stop there: the very word “butterfly” comes from the butter-coloured wings of the brimstone.

So fire and brimstone? Link Wray thought so in his 1971 song of the same name:

“I saw fire, fire and brimstone
Comin’ down on my head…”

But no need to worry – the beautiful brimstone butterflies are lovely to look at and definitely don’t breathe fire!