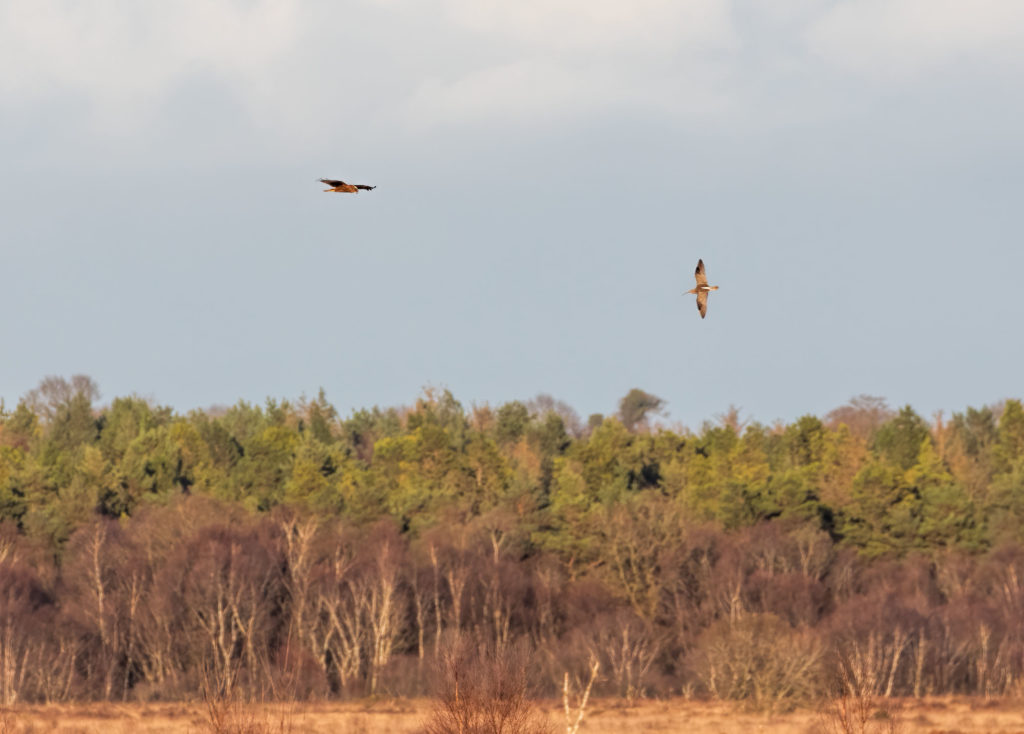 Birds on the Mosses, by Dr. Bob Harris

With Spring arriving, we asked Dr. Bob Harris to write a piece for us about the birds that live on the Mosses , whether that’s year ’round or just for a season.

Bob mentions the curlews and lapwings that are returning to the Mosses now that winter is ending. They’re ground-nesting birds and their numbers are declining across the country. So it’s more important than ever that we ask you to keep your dogs on a lead when you visit the Mosses with them to help protect these species and others.

We want to protect you, too, so we suggest that you wear wellies or tall boots when you visit. We’ve have a lot of rain over the winter and the Mosses are doing their job in holding rainwater on the peat. But that means it’s pretty muddy on some of the trails, so we’ll be wearing our wellies and suggest that you do that, too.

The 1st March – St. David’s Day but, more importantly, the Meteorological start of spring. On the Shropshire Wildlife Trust site at Sinker’s Fields, Whixall, the bird life is changing, with winter visitors becoming restless and getting ready to move. Absent now are the large numbers of Wigeon and Teal, and the small numbers of Pintail and Shoveler fall daily. Water Rails have gone, although the Coot and Moorhen still stubbornly hang on while water levels remain. Canada and Grey-lag geese, typically in large numbers overnight, have been replaced by breeding pairs all noisily laying claim to potential nest sites, and Mallards? there’s always Mallards. As water levels fall many birds move to the nearby Mosses to roost overnight and, seemingly, never come back.

Our winter Fieldfares and Redwings having eaten virtually every berry along the hawthorns of the canal bank and with warming temperatures and increasing day length their thoughts have turned to places further north. Many are now departing in small flocks.

Besides all of these birds leaving, spring on the Fields is also marked by the calls of incoming Curlew, the ‘pee-wit’ of the Lapwing, and the ‘sqwark’ of the Black-headed gulls. Wagtails begin to appear, early Sand Martins stay for a day or two to be quickly replaced by longer staying swallows, and eventually swifts. The song of the Dunnock and Robin follows one everywhere and the Cettis’s Warbler present on /off all winter is still here – this year it may actually stay to breed.

Around the tree-lined edges of the Mosses the flocks of Lesser Redpolls have now all but gone but the small charms of Goldfinches still exist drawing attention to themselves by their constant ‘silver-twittering’. The small flock of crossbill seen in the conifers over winter now appear to have moved to better breeding habitat. Great Spotted Woodpeckers are starting to drum and the yaffle of the Green Woodpecker can sometimes be heard. Blackbirds and Blue Tits seem to be everywhere and the ‘teacher-teacher’ call of the Great Tit is loud and persistent. Everyone is waiting for the first calls of the migrant Chiffchaff and Willow Warbler which definitely indicates that spring is almost here.

On the nearby Mosses themselves the cold, bleak and depressing winter habitat with its occasional hunting Harrier or Barn Owl, its over-flying Raven, or the ever present Carrion Crows, things are slowly beginning to change. Visits which previously only recorded the occasional Meadow Pipit, snipe or ubiquitous wren now rub shoulders with increasing numbers of excited Reed Bunting, Stonechat and Skylark. Pairs of Linnet, displaced for the winter, now reappear in their usual haunts in the path-side trees and bushes. Whitethroats are (will be) in profusion but Yellowhammers are becoming rare and the nearest Corn Buntings are close; at nearby Wem Moss.

Out in the centre of the Mosses spring is heralded by the evocative bubbling calls of Curlew, as they have now paired off and have started to take up territories and nest sites.  Lapwings also add their courtship flight across the Mosses, while Black-headed gulls ‘sqwark’ in profusion, collecting over their chosen colony sites. Canada Geese honk noisily, with every puddle of water seemingly having its own pair of geese.

As other summer migrants arrive back they too take up territories and nest sites. Garden Warbler, Grasshopper Warbler and Spotted Flycatcher all nest on site, alongside Kestrel, Merlin and Teal. Cuckoo’s range over the whole site – probably targeting Meadow Pipits to receive their single eggs – but unfortunately, as elsewhere, their numbers each year appear to be less. Snipe, although present on site all year, with larger numbers in the winter, are thought to breed but concrete evidence is difficult to achieve.

As the weather warms and more and more insects appear on the wing swallows feed about the periphery of the Mosses while swifts hawk everywhere. At some point Hobbys will appear – with up to five counted on site at one time.

Night time visits to the Mosses are few and far between – particularly as it’s also “Mosquito Party-time”. But volunteers do visit. Surveys are undertaken and planned for Long-eared and Tawny Owl, with dawn and dusk visits for snipe and nightjar (which do breed on site). Recent research reports frequent movement by Curlew at night so additional surveys at this time may give a better indication of breeding numbers; indeed no one really knows the extent of bird activity on the Mosses at night.

Note: monthly bird surveys are undertaken across the whole site together with WeBS counts and surveys as part of Defra’s Avian-flu monitoring. Over 100 nest boxes have been erected and are monitored by volunteers as part of the BTO Nest Record Scheme. Licensed Bird Ringing occurs both spring and autumn targeting migrants as they move through the Mosses. All of those birds marked in bold in the main text are targets for specific surveys in 2021.