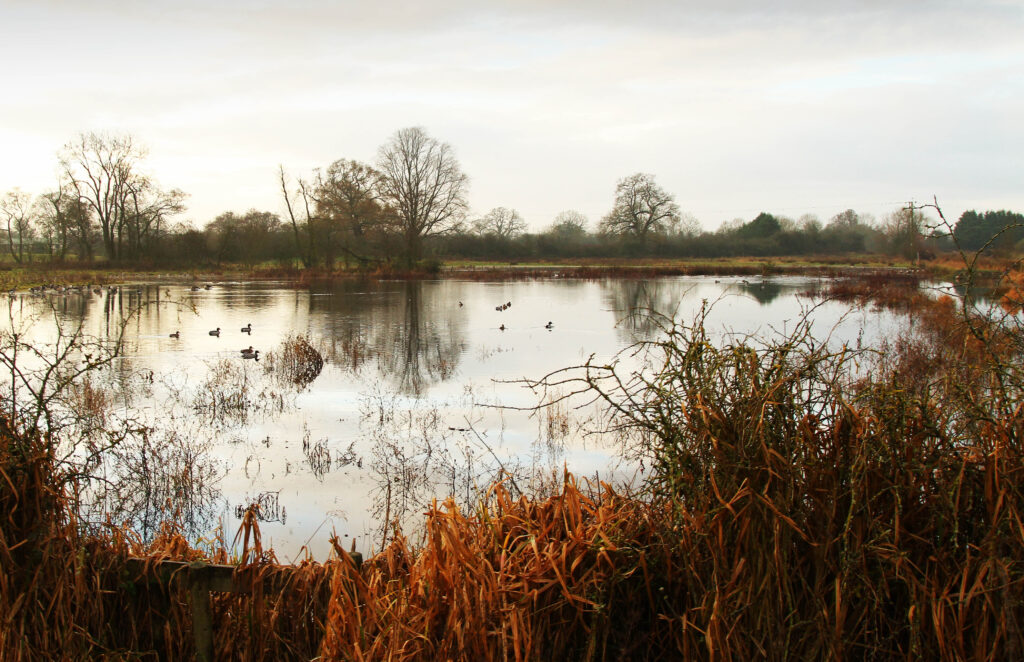 To us, the UK winter may seem chilly, if not downright cold. But to the thousands of teal, wigeon, shovelers and shelducks that spend their summers in the Arctic, winter on Sinker’s Fields near Whixall Moss is just the ticket to a warm winter habitat. They join flocks of mallards and other birds that enjoy the food and habitat they encounter at Sinker’s Fields.

Named for Charles Sinker who was one of the people drawing attention to the need to protect and restore what is now known collectively as the Marches Mosses: Fenn’s, Whixall and Bettisfield Mosses NNR, Wem Moss and Cadney Moss.

Teal (Anas crecca) are the smallest ducks that live in or visit Britain, weighing less than half a kilo. They’re distinguished by the teal-green facial markings – almost like goggles. Their favourite habitat is shallow acidic pools with nearby vegetation. This makes Sinker’s Fields ideal for them as the fields sit on top of peat – already a flock of over 100 birds has been seen roosting at the fields. Teal are typical ‘dabbling’ ducks, feeding on the surface while swimming or wading in shallow water. Flocks build up in the UK from August to a peak in December of some 2,000; they stay until early March when they make their way back to Northern Europe.

You can spot teal as they feed in large groups. They’re agile flyers, often bursting straight up in the air in the evening. They fly in tightly packed groups, twisting and turning as they go.

The teal’s call is a very clear ‘krit-krit ’. Some bird writers describe the call this way: “as good a winter sound as a wigeon’s whistle”. Since they’re often found together at Sinker’s Fields, you can hear them both on your winter walk.

Wigeon (Anas penelope) are medium-sized ducks. Mainly chestnut and white with a tucked-in head, high forehead and short bill, the drake is considered one of the prettiest of UK waterfowl. Wigeon fly by the hundreds in irregular lines. In flight, their long, pointed wings and white belly are noticeable. The wigeon whistle is distinctive – drakes sound a loud, musical ‘whee-ooo’, while the female’s call is described as a ‘purring growl’. That whistle is, again, one of the great sounds of a British winter.

Shovelers (Anas clypeata) also join the flocks at Sinker’s Fields. Larger than teal and wigeon and squatter than a mallard, they’re distinguished by their huge, spade-like bill, hence their name. The edges of shovelers’ bills are lined with comb-like ‘teeth’ that the birds use to sift food as they sweep their bills from side to side to capture seeds from reeds and sedges, algae and small mollusks from the water.

Sinker’s Fields and Whixall Moss are an important breeding site for shovelers; numbers peak in the late autumn and winter and include some birds that carry on to France and Spain.

Shelducks (Tadorna tadorna) sit between the duck and goose families. About the same size as mallards, they have very distinctive white, chestnut and black patches with a glossy, dark green head. Their red bill has a distinctive ‘knob’ at the base. You can spot them in the air by their arched wings and slow, goose-like wing beats, and hear them by their nasal, knocking call: ‘took-took’ from the drakes and a similar, wheezy ‘kerr-kerr’ from the female.

Mallards (Anas platyrhynchos) round off the most-often seen birds on Sinker’s Fields. While present in the UK throughout the year, numbers swell during the winter as birds from far northern Europe head south. Mallard drakes are distinguished by their iridescent, bottle-green head and white neck ring and their waddling walk caused by the position of their legs well back on their body. They’re the largest surface-feeding duck in the UK, often up-ending and using their broad, flat bill to filter plant and tiny creatures from the water.

Mallards can spring straight up with a powerful whirring of their wings, usually in pairs or small groups. The drake’s call is a hoarse-sounding ‘raaarb’ sound.

These ducks and more are among the hundreds you can see at Sinker’s Fields. It’s well worth choosing this area for your winter walk – a great route is to park at the Morris’ Bridge car park and walk a circular route to the bird fields, then across Morris’ Bridge to walk on Whixall Moss, and then back to the car park for your warm thermos of tea or coffee. Whatever your route, please view birds from the lane or from along the canal towpath and don’t wander out over the fields – that will disrupt the birds and they might not return.

The white-faced darter, a nationally-noted species, is found on the Mosses. It needs the Mosses' habitat mix - shallow pools, open water and moss cover. Read more