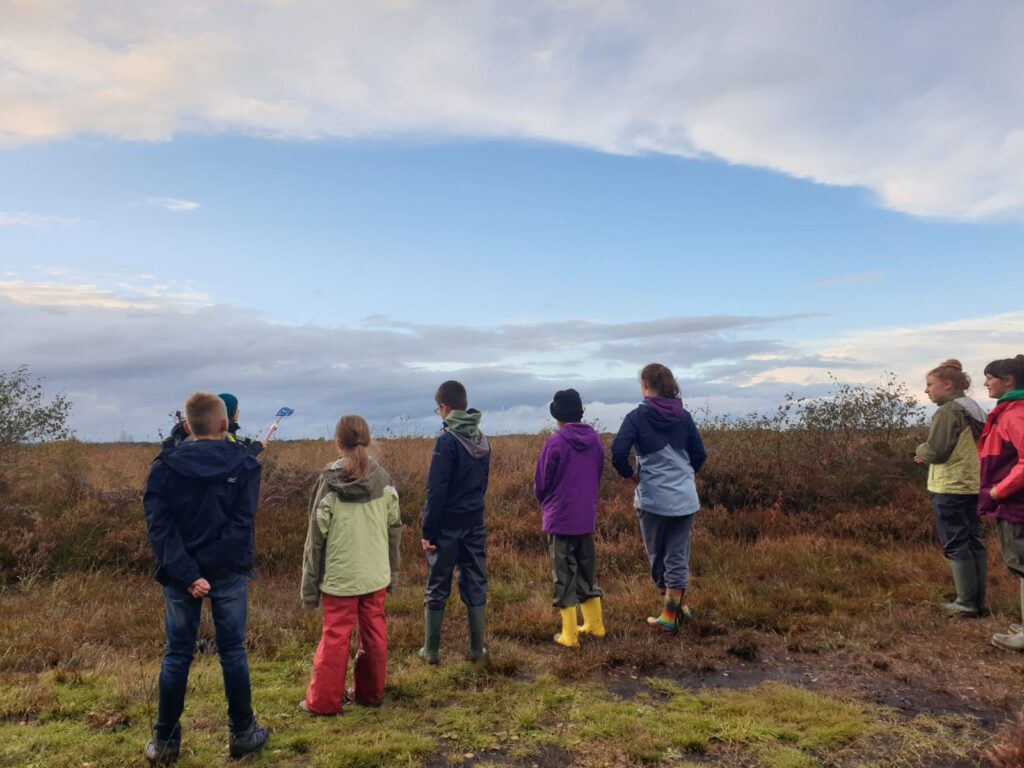 A group of 15 young people from the Wem Youth Group met at the Morris Bridge Car Park one morning in October and set off with their Shropshire Wildlife Trust guides to explore a rare habitat – Fenn’s and Whixall Mosses, part of the Marches Mosses BogLIFE regeneration project.

Many had never been to the Mosses before and weren’t sure what to expect. What they found was a vast area of open land – and wide, open sky – as the entire Marches Mosses covers some 2,500 acres. Some of the children said the Moss looked like the African Savannah and asked, “Are there  lions out there?

To learn more about some of the wildlife that has made their home in the harsh environment of the Mosses, the group looked at snake skins, dragonflies, tiny frogs, Sphagnum moss and fungi. They were fascinated by the acidic nature of the rainwater that sits on top of the peat, keeping it moist. One young person asked a very insightful question: “Has anyone dipped a finger into the bog water to see what it tastes like?”

One of the important stories about the Mosses is the work that the BogLIFE team are doing to regenerate this rare peatland. As they listened to Anna describe the work, the group began to understand what’s being done to save this precious land, and how peat stores more carbon, acre for acre, than the same amount of forest.

The youth group had such a good time, learned so much, that they asked to go back again during the October half-term break. And they did! As it was half-term, the youth group members could spend a full day out on the Mosses with Anna and the other guides.

Anna takes up the story: “The first trip was a bit like a ”trolley grab” – quick snapshots of lots of topics. When the group asked for a return trip, we organised a full day of activities. We used Halloween as our theme, focusing on spiders. I started by asking them how they felt about spiders – found a near even split between those liking spiders and those really, really not liking them.”

From that point, the group learned about three spider species that live at the Mosses – water spiders, the famous raft spider and the rare jumping spider that was re-discovered at the Mosses after being thought to be extinct.

It’s amazing how much the group covered in a day as they reconnected with nature: they went pond dipping for raft spiders, saw fungi and sundews, bounced on the peat surface, went on a treasure hunt to look for autumn colours, even learned about bog bodies. The Halloween spider theme reappeared when the group made their own spiders out of natural materials.

They loved wading through the peat and puddle jumping and, more quietly, did an amazing job of remaining silent on a two-minute walk – and were amazed at what the silence really sounded like, compared to the noises in their busy daily lives.

Ah, those Halloween spiders – by the end of a great day, some people reported that they liked spiders a little more than they had in the morning.

Will the Wem Youth Group return to the Mosses? Will they bring their families to walk the trails and get closer to nature? I’m sure we’ll hear more from the group members about their adventures on the Marches Mosses in the future.