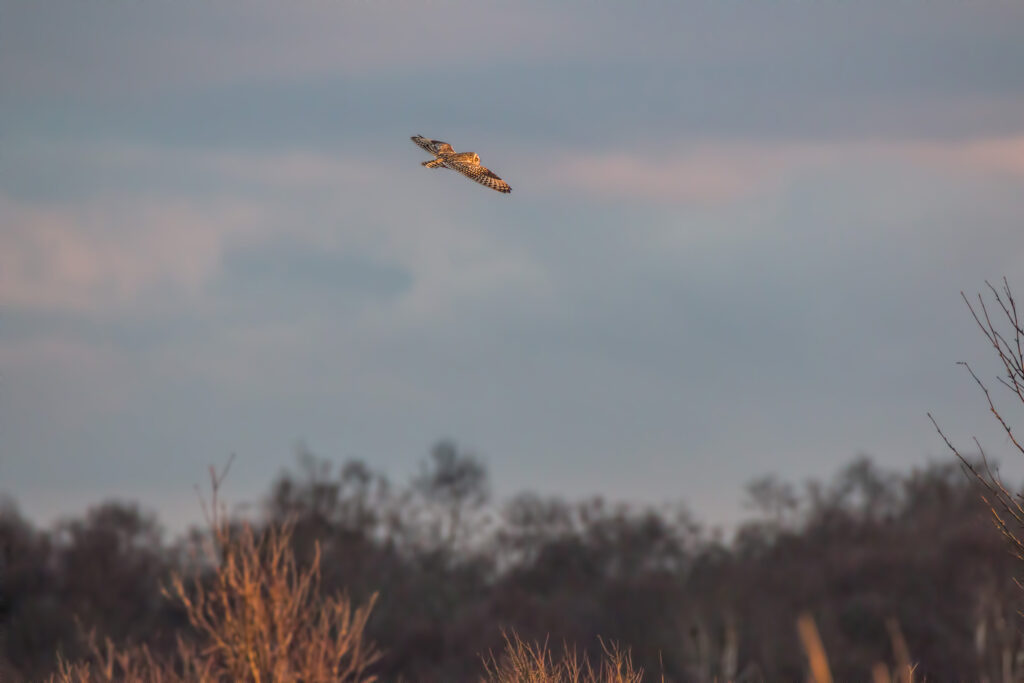 Short-eared Owls Winter at the Mosses

If you’re out walking on the Mosses, you might, just might, catch a glimpse of a rare creature overhead – an owl out hunting for its dinner during the daytime. If you do, that will likely be a short-eared owl (Asio flammeus), which are the least nocturnal of all owls.

The Mosses are a great habitat for the short-eared owl. With its wide-open skies and flat landscape, it’s easy for the owls to spot their prey, generally voles and other small rodents. Numbers increase in winter with birds heading south from Scandinavia, Russia and Iceland. They nest in scraped-put hollows that are lined with soft materials – grass, downy feathers and the like.

Short-eared owls are not only the most-often seen owl during daylight, but they might also be the most handsome.

They indulge in “aerial antics” in courtship and territorial displays. The male’s call is a frequently-repeated “doo-doo-doo”. This has been described a similar to the sound of a distant steam engine puffing its way along the track.

They’re medium-sized at 35-40cm – similar size in fact, to a barn owl but with long, dark-tipped wings. Their feathers are mottled yellowy-brown above and paler underneath and they sport a wedge-shaped tail. Yellow eyes are surrounded by broad black circles. Short ‘ear tufts’, which are often invisible, provide its common name as well as their nickname of ‘Shortie’.

Numbers have decreased significantly since sightings in the 19th Century. Protected by the Wildlife and Countryside Act 1981, short-eared owls are classified as Amber in the UK Red List.

If you’re lucky enough to spot a short-eared owl in flight over the Mosses, you’ll see a pale, narrow-winged bird that will often glide with its wings in a wonderful V shape.

So, if you need another excuse to get out for a winter’s walk on the Marches Mosses, watching for a short-eared owl should do it.  Let us know if you spot one!