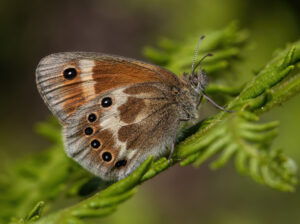 Found only as far south as Fenn’s and Whixall Mosses, the large heath butterfly is an emblematic species of the Marches Mosses. It is a northern mire species that needs the acidic, wet peatlands of the Mosses in order to thrive throughout its life cycle.

You might see the large heath as you walk along the trails in the Mosses – medium-sized with a wingspan of about 40mm, its dull brown upper wings have large, conspicuous eyespots with white centres. The chestnut brown underside forewings are heavily marked with a row of eyespots, evolved to confuse predatory birds. The large heath usually sits with its wings closed and can fly in dull weather, as long as the air is warm enough – at least 14C.

The female large heath lays her eggs in July and August. Laid singly, the eggs hatch in about two weeks. Larvae feed through the autumn and then hibernate over winter, emerging to feed if the weather is mild. The pale green chrysalis is formed from mid-May until early July, attached to a firm stem by a silk pad. The adult large heath emerges some three weeks later and lives for two to three weeks.

The large heath is part of the butterfly sub-family Satyridae, commonly known as Browns. Originally called the Manchester Argus or Manchester Ringlet, the large heath was first identified by Müller in 1764. Called by their scientific name of Coenonympha tullia, the large heath that live on the Mosses are of the subspecies davus; these are more heavily spotted than their northern cousins. All large heaths are protected under the Wildlife and Countryside Act of 1981 and are a priority species in the UK Biodiversity Action Plan (BAP). The Butterfly Conservation charity estimates that the large heath’s distribution across the UK has declined nearly 60% since the 1970s. 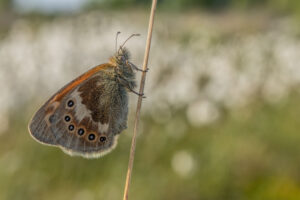 Here on the Mosses, large heath numbers have increased as the BogLIFE regeneration project has raised water levels, rewetting the peatland. Large heath larvae overwinter and feed on hare’s tail cotton sedge (Eriophorum vaginatum) that border the pools on the Moss. Adult large heath take nectar from the flowers of cross-leaved heath (Erica tetralix), which thrive on the lower, mossy hummocks of Fenn’s and Whixall Mosses.

The large heath is one of 27 species of butterflies that have been identified on the various landscapes of the Mosses. It is special because it symbolises the return to health of the rare habitat that is the Marches Mosses.

Global peatlands contain at least 550 gigatons of carbon, more than twice the amount of carbon stored in all of the earth’s forests.