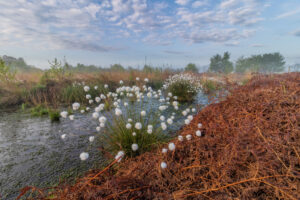 Sphagnum moss and peat bogs are intrinsically intertwined. Sphagnum is the primary building block of peat, and makes the water on peat bogs acidic, thus creating the conditions for all other bog species to grow and thrive.

Fenn’s, Whixall and Bettisfield Mosses are typical of this relationship. Botanists have identified 19 species and varieties of Sphagnum across the rolling surface of hummocks and hollows on the Mosses, living amongst other bog plants. This wide variety of species creates a beautiful mosaic of colours and shapes throughout the year.

In the deep pools, you’ll find the large, green and furry Sphagnum cuspidatum, along with common cotton sedge, and rare bladderwort with their yellow, pea-like flowers.

Species that grow on the pool margins are the nationally rare Sphagnum recurvum – only about 20cm long with yellowish-green loose tufts – and the smaller, grey-green S. tenellum with an appearance of small “beads” on its branches. These grow along with cranberry, bog asphodel and hare’s tail cotton sedge, as you can see in the main photo in this article.

Rare Sphagnum magellanicum, chunky and blood-red, prefers the wetter lawn areas, as do the insect-eating sundews. Also chunky in shape, the more common green S. papillosum, is found among the cranberries. These are the main peat forming Sphagna.

On the hummocks that stand higher than the lawns, S. capillifolium grows – delicate with rich red colouring. It’s found principally on uncut areas of the bog such as Bettisfield Moss, growing along with grey-green cross-leaved heather and a nationally scarce plant, bog rosemary.

When rainwater falls on the bog surface, Sphagna take nutrients from it by swapping hydrogen ions into the water, which makes it very acidic and stops fungi and bugs breaking down any dying vegetation on the bog. As the lower leaves of these and other Sphagnum mosses die, they don’t decompose as they would on dry ground, but are essentially “pickled” in the acid-rich water of this rain water-fed bog.  This slowly creates new peat, which grows at only 1mm each year. Carbon is retained in the peat; acre for acre, peat bogs store 30 times more carbon than the same area of forest.

You can tell Sphagna from any other mosses as they have a dense terminal tuft of branches or capitulum on the top of a stem. The individual plants grow densely together to form a cushion of capitula. Each year as each plant forms a new capitulum, the stem elongates and last year’s branches become spread out down the stem. The plant’s growth structure and way they cluster together raises bog water by suction above the surrounding pool level. So over time the bog surface grows up and up to form a raised bog, holding water sometimes 10 m above the surrounding landscape.

The continuing regeneration work on the Marches Mosses has increased the spread and health of Sphagnum and other bog plants. For centuries until 1990, over 90% of the peat on the Mosses had been damaged; it’s now being restored through building bunds to hold rainwater; shifting the location of drains that allowed rainwater to escape the bog; and removing vegetation that isn’t native to bogs and pulls water out of the bog. You can help to preserve the world’s Mosses, helping them counter-act climate change, in your own garden, by buying peat-free compost.

The Marches Mosses, an internationally important site and a national treasure, continues to be a place of great bio-diversity, open skies and tranquillity, a place where Sphagnum and other bog plants can thrive.