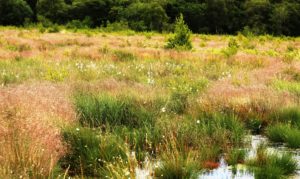 Note: Please be aware that this page contains links to external websites.

The Marches Mosses encompasses the Fenn’s, Whixall and Bettisfield National Nature Reserve (NNR) as well as Wem Moss NNR and Cadney Moss, the third-largest lowland raised peat bog in the UK. The Mosses are designated as NNR, SSSI, SAC and also have Ramsar status.

What do all those initials stand for? What do they mean? What is the Marches Mosses all about?  We’ve tried to answer those questions and more here…

This is the first in a series of questions and answers about the Marches Mosses that we hope will help you to understand more about this precious, rare habitat.  We’ll start with an overview of the Mosses, and update with more FAQs from time to time.

What is an NNR?

National Nature Reserves (NNRs) have been established to protect some of the UK’s most important habitats, species and geology, and to provide ‘outdoor laboratories’ for research. Most NNRs offer great opportunities to schools, specialist interest groups and the public to experience wildlife at first hand and to learn more about nature conservation.

What is an SSSI?

SSSI stands for “Special Site of Scientific Interest. They are those areas of land and water that best represent our natural heritage. They are designated by Natural England and Natural Resources Wales (NRW) either side of the border. The aim for each site is to achieve ‘favourable condition’ status. Favourable condition means that the SSSI’s habitats and features are in a healthy state and are being conserved by appropriate management. Under the statutory SSSI designation Natural England and NRW are enabled  to assess whether proposals to carry out operations within a SSSI have a positive or negative effect on the nature conservation condition of a site.

What is an SAC?

Special Areas of Conservation (SACs) are strictly protected sites designated under the EC Habitats Directive. These form a European-wide network of important high-quality conservation sites that will make a significant contribution to conserving the habitats and species that are considered to be most in need of conservation at a European level. There are currently 658 SACs in the UK covering  78 habitat types.

What is a Ramsar site?

The Convention on Wetlands of International Importance especially as Waterfowl Habitat (‘Ramsar Convention’ or ‘Wetlands Convention’) was adopted in Ramsar, Iran in February 1971 and came into force in December 1975. It provides the only international mechanism for protecting sites of global importance and is thus of key conservation significance.

The Convention covers all aspects of wetland conservation and ‘wise use’. It has three main ‘pillars’ of activity:

Peatlands are a type of wetland. They occur in almost every country on Earth, currently covering 3% of the global land surface and were formed over the past 10,000 years or more. The term ‘peatland’ refers to the peat soil and the wetland habitat growing on its surface.

Peatland landscapes are varied – from blanket bog landscapes with open, treeless vegetation in Scotland to swamp forests in Southeast Asia and Africa.

What is a lowland raised bog?

Lowland raised bogs are discrete peatland entities, often individually named, and are mostly found within agricultural landscapes. They generally occur in the lowland areas northwest of a line from Somerset to Hull.  These areas receive sufficient annual rainfall of 700-1200mm, to allow growth of large domes of rainfed peat where conditions are suitable. The peat, of the consistency of black custard, formed raised dome up to 8m high. Intact lowland raised bogs are surrounded by “lagg” – wet woodland “carr” mainly of alder and willow, reed swamp and rushes.

Nearly all of the UK lowland raised bogs have been severely damaged by cutting and drainage since medieval times. There are a few remaining patches of uncut peat at Fenn’s, Whixall and Bettisfield Mosses but 90% of the peat there has been damaged.

What is peat? How is it formed?

Peat is formed by Sphagnum moss, building over millennia on top of the remains of wetland plants like sedges, rushes and bur-reed. Sphagnum holds rainwater like a sponge and takes nutrients out of rainwater. This makes the water very acidic, which in turn slows the decomposition of Sphagnum and other bog mosses- in fact, pickling these plants and forming peat, layer on layer, over centuries. Peat forms very slowly. Left uncut or drained, it grows at only about 1mm per year.

What’s the difference between a peatbog and a fen?

A peatbog is fed only by rainwater, which is slightly acidic and very low in nutrients. Fenlands and marshes by contrast are fed by groundwater, which contains nutrients and minerals, supporting a different range of wildlife than a peatbog.

A ‘schwingmoor’ – or quaking bog, is one of the rarest habitats in the UK and in many ways our most incredible. Quaking bogs form when an aquatic moss, known as sphagnum, begins to grow across the surface of acidic water bodies, such as meres or bog pools. The finest examples of schwingmoors are found  nearby in the Meres and Mosses.. Several of these  are NNR sites and can only be visited by permit-holders or by arrangement with Natural England for safety reasons.

About the Marches Mosses

How big is Marches Mosses?

Marches Mosses, which encompasses the Fenn’s, Whixall and Bettisfield National Nature Reserve (NNR) as well as Wem Moss NNR and Cadney Moss covers around 2,500 acres in northwest Shropshire and north Wales. It is the third larges lowland raised bog in Britain, and one of the most southerly – most peatland in the UK is in the northwest or Scotland.

Why is Marches Mosses so special?

The landscape of the Marches Mosses is an amazing area of wide open skies, not often found in busy, urban Britain. There is a real sense of tranquillity as well, with little of the noise that generally surrounds our lives.

Besides the wonder of the peat itself, the Mosses are home to a wide range of plants and animals, many of which are become specially adapted to the harsh environment of the Mosses. This biodiversity includes bogmosses and cotton sedges, cranberries and the insect-eating sundew. Birds nest in the trees surrounding the peat, or on the bunding that holds bogwater in place, including curlews, skylarks, lapwing and hobbies. Nearly 2,000 species of invertebrates thrive, including the large heath butterfly, and the rare white-faced darter and raft spider.

Who owns the Marches Mosses?

Two thirds of the designated area of the Marches Mosses is owned or leased by Natural England, NRW and Shropshire Wildlife Trust with the remainder being in private land ownership. The nature reserve was first established in 1991 with its size expanding over time as a result of the acquisition of additional land.

How do the Marches Mosses impact on climate change?

The Sphagnum moss and other plants on the Mosses decompose very slowly and are held in the bog water. The carbon in the plants is held in the bog as new peat is formed, rather than being released into the atmosphere. This means that peatbogs are a giant carbon sink. They store more carbon, acre for acre, than the same area of forest.

Conversely, allowing the peat to dry out by cutting it for garden compost, or draining the peatbog, releases all that carbon into the atmosphere. This makes it even more imperative to regenerate the Marches Mosses.

How can Marches Mosses help to control local flooding?

Peatland is 90% water. Peat bogs work to slow the flow of rainfall through the landscape, and thus help to prevent the risk of  flooding downstream.

How can I help fight the climate crisis?

One very important thing you can do to help fight climate change is to use only peat-free compost in your garden.  Cutting peat for horticulture releases the carbon stored in the peat into the atmosphere.