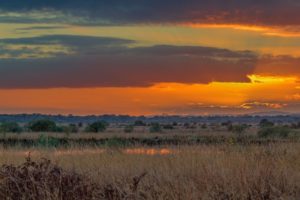 New evidence shows that, when it comes to carbon capture, trees are good but bog is best! A recent scientific study headed by Angela Creevy of Edge Hill University has shown that by removing the commercially planted non-native conifers from a local lowland raised bog the ‘carbon sink’ function of the bog has been restored allowing them to ‘impound’ greenhouse gases from the air.

The study was carried out on Fenn’s, Whixall and Bettisfield Mosses National Nature Reserve near Whitchurch. The Reserve is part of the wider Marches Mosses BogLIFE restoration project which has removed non-native conifers from the peat, restoring the bog’s ability to heal from the damage caused by commercial tree planting and peat cutting activities.

The group also found that, out of a range of differing recovering plant communities, a ground cover of Sphagnum bog moss along with other bog plants is best for taking greenhouse gases out of the atmosphere. The Marches Mosses BogLIFE Project is currently restoring the peat bog by re-wetting formerly afforested areas to encourage the regrowth of Sphagnum bog moss, the basis of peat formation over the last 10,000 years.

In the UK, the industrialised forestry planting of open peatland was widespread in the late 20th Century, with 800,000 hectares – about 20% of the total – supporting serried ranks of conifers. This involved the drainage of the peatlands, not only destroying their ability to capture carbon, but releasing previously stored carbon into the atmosphere. 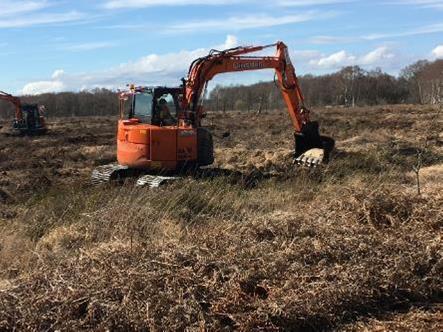 The BogLIFE Project has focused efforts on the removal of existing plantations and invasive tree species such as birch. This has increased the amount of rain reaching the ground, vital for peat bogs, and has stopped the trees syphoning water out of the bog. The Project has used cell damming to raise the water table, slowing the flow of rainfall off the restored plantations. Together, this slows water flowing into the river systems – helping to reduce flash flooding downstream.

In numbers – Fenn’s & Whixall National Nature Reserve stores 24 million tonnes of carbon. The carbon emission from the 660 hectare area of damaged peatland being restored at Whixall is roughly the equivalent to the emissions from all the cars in Wem and Whixall or 75% of the cars in Whitchurch!  Peatlands cover just 3% of the Earth’s surface but contain 30% of all organic carbon on the planet; that’s twice the carbon in all the World’s trees (94% of UK lowland peat bogs have been destroyed).

Read the recent article on peatbogs from The Guardian here

The area known as the Marches Mosses are made up of several peatbog areas: Fenn’s, Whixall and Bettisfield Mosses, with Cadney Moss to the south. Shropshire Wildlife Trust manage and own Wem Moss Nature Reserve, which is also being restored. Peatbogs are so important for an array of wildlife, but it is becoming clear that they are just as important to us. Support the work of Shropshire Wildlife Trust by clicking here.