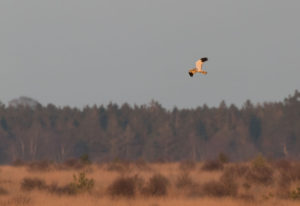 The former scrapyard is being covered by the removal of turf from nearby fields which were once part of the bog. The fields will be reverted to bog habitat by planting 150,000 ‘microproprogated’ sphagnum hummocks in a seeding operation following the turf-stripping.
This method of bog creation is an innovative experiment in regeneration. It uses local sphagnum collected from the Marches Mosses, carefully cultivated into ‘plug plants’ in a sterile setting and then re-introduced to create the original bog environment.
Degraded sites, where the Sphagnum cover has been lost due to human interventions such as harvesting, peat extraction and drainage, overgrazing, fire and air pollution are slow to recover without further human action. The successful return of Sphagnum moss, by natural recovery or managed reintroduction, is an essential factor for repair of degraded bog habitat.
Although the work was started in November, heavier than usual rainfall has subsequently delayed the project. Works will re-commence when the conditions improve sufficiently.

Thanks to the marking out carried out by Natural England colleagues, bunding work has been undertaken continuously since August and good progress has been made. Large areas of bunding are underway on the North East Fenn’s area. Heavy rain in the autumn has shown how effective the bunds are at holding water on the moss. More bunding will be completed throughout 2020.

The last parcel of conifer woodland north of the railway at Chapel Lane, has been harvested and remaining brash is being removed. The picture below was taken during a visit from Reaseheath College’s Forestry and Arboriculture students.
Elsewhere Natural England is appointing contractors to undertake some broadleaf tree removal and thinning works. This will leave a screen of trees around the edge of the bog and will enable access for the peat bunding works to occur. This work will start in mid-January now that a scrub removal contract, required in advance of peat bunding, has been completed.

The World’s End rewetting scheme is planned to commence in 2020 following submission of a planning application early in the New Year. This carefully designed drainage system will in part divert water away from properties around the Moss Lane area, currently dependent on a mechanical pumping station. The 1826 World’s End Drain was deepened in the 1970s to allow the new pumping station, installed when few appreciated how rare raised bogs were. This continues to draw water out of the NNR and now, as in the East Anglian Fenlands, the drained peaty farmland has shrunk to form a depression and is likely to become progressively ever harder to drain. The pumping system was originally designed to drain water away from two farms, but now serves more properties than originally intended. Natural England are proposing to alter the current set up by introducing gravity-based drainage route which will be integrated with the planned rewetting scheme for the 9 ha of land Shropshire Wildlife Trust purchased in 2017. Not only will this assist in part to prevent the current drainage from worsening it will also serve to help ensure bog habitat on the NNR is protected , making it into the ideal habitat for the flora and fauna that thrive in this distinctive ecosystem. Plans for the complex rewetting scheme at World’s End land are at an advanced stage and ongoing discussions are progressing with property owners affected by it.

There are also plans to build a viewing tower on the boardwalk track near Roving Bridge, which will be accessible to walkers hiking along the canal towpath. Plans have also been submitted for the construction of a new bird hide at Charles Sinker’s Fields at Morris’s Bridge. The hide will allow birdwatcher a clear view across the fields to view the many interesting bird species that visit the site. Watch this space for more details! 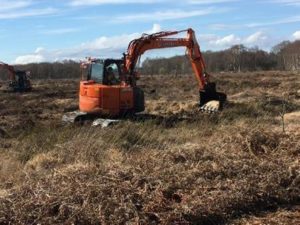 The white-faced darter, a nationally-noted species, is found on the Mosses. It needs the Mosses' habitat mix - shallow pools, open water and moss cover. Read more