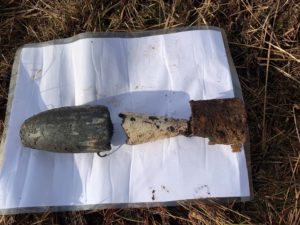 On the 74th anniversary of Armistice Day, conservationists working at Fenn’s and Whixall Mosses National Nature Reserve found two World War II practice bombs. The bombs were uncovered while workers were excavating to build water-retaining “bunds” as part of the regeneration of the Mosses near a former bombing range. A specialist in UXBs was employed on site overseeing the works. Part of Fenn’s Moss was used for the five years of WW11 as a practice target range for British, American and Canadian bomber crews flying Wellington, Hawker Hart, Avro Tutor, Harvard and Spitfire planes. Training crews came from several units, including 11 SFTS, Shawbury, 10 FTS, Tern Hill, and units from as far away as RAF Hawarden, Lichfield and Rednal.

The bombing site was set up near artillery ranges that had been created in the First World War. The site had a 700 yard radius with a 36 square yard target. Because it would have been impossible to paint the target onto the peat, it was made of wood, painted white and set up on mounds of peat.

The 8.5lb practice bombs found at Fenn’s Moss are typical of the thousands dropped on the target area. Painted white with green bands on the tail, the bombs were made up of three sections within its moulded Bakelite body: a nose section for the striker; a central section filled with lead-antimony balls and the detonator; and the rear section that was filled with chemicals that created white smoke when the bomb landed. You can still see the white paint on the bombs found in November.

The work that led to finding the bombs is underway to create cell bunds on the Moss. Made of peat, these bunds are essentially shallow dams built in large rectangles across the peat. These capture rainwater, which is needed for Sphagnum moss growth that acidifies the bog and creates more peat. It’s all part of the Marches Mosses BogLIFE project to regenerate Fenn’s, Whixall and Bettisfield Mosses National Nature Reserve (NNR).

The Mosses make up the third largest lowland raised bog in Britain and, due to their importance, are a Site of Special Scientific Interest (SSSI) and a European Special Area of Conservation (SAC). Peatland is one of the rarest habitats on earth and, because peat stores more carbon than plants, trees and other types of soil, the Mosses are an important weapon in the fight against climate change. Repairing the peatland has also let to an increase in biodiversity as plants and animals that thrive in the boggy conditions return.

The area where the WWII bombs were found is not accessible to the public. However, there are a range of walking trails at the Mosses, including a History Trail that starts at the Manor House NNR base near Whixall. Here you can learn more about the peatland’s contribution to both war efforts or just have an interesting day out under the wide, open sky of Fenn’s, Whixall and Bettisfield Mosses.

Peatlands are important sites for wildlife, some of which are found only in the peatlands.