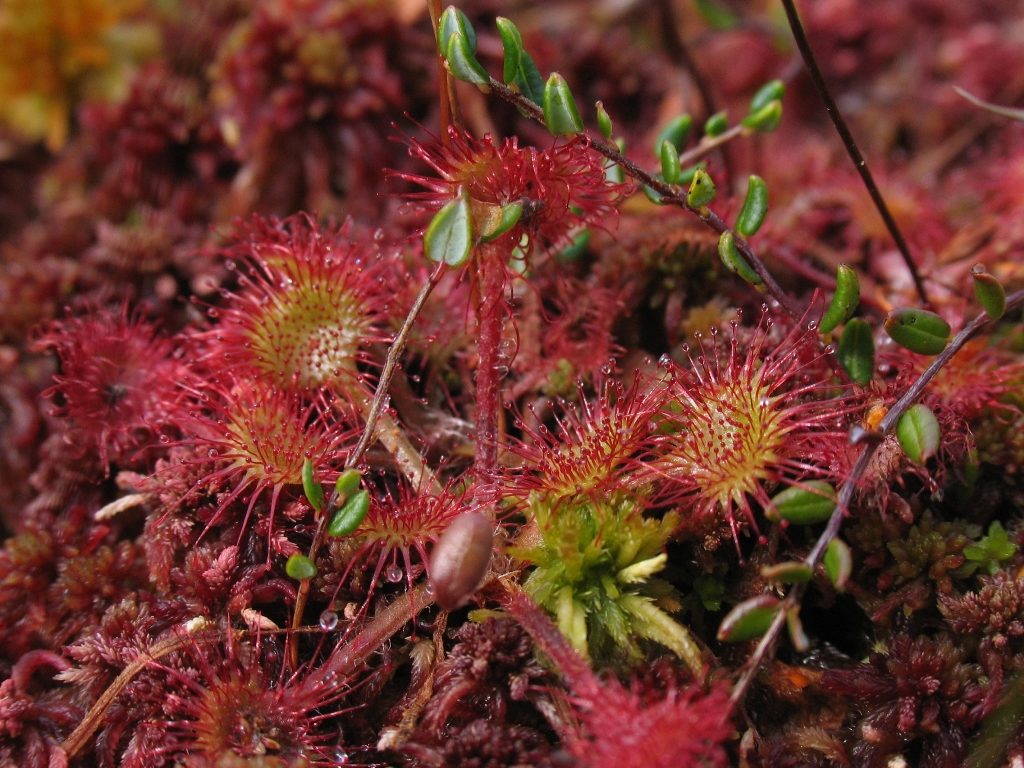 The Sundews on Fenn’s, Whixall and Bettisfield Mosses have stopped eating insects. Scientists working on restoring the Mosses have noticed this phenomenon over the past year or so and have worked out the reason why this has happened.

OK, but what’s a Sundew? Sundews are carnivorous plants that live on the bog habitat of the Mosses.  They add to their food supply by capturing and then digesting insects (and other invertebrates) in the sticky hairs around the edge of their flowers. Sundews do this because it’s difficult for them to get the nitrogen they need from the acidic water they live in on the Mosses; acidic water is very low in nutrients like nitrogen.

Why have they stopped capturing insects? Instead they’re getting all the nitrogen they need from the atmosphere particularly in the form of  ammonia pollution. In effect, they’ve “gone veggie”.

What is ammonia, anyway? It’s a form of volatile form of nitrogen  (NH3 ) that has increased in the atmosphere over the past 5-10 years. It is man-made and is actually worse in rural areas than in large cities.

Ammonia in the atmosphere is polluting Fenn’s, Whixall and Bettisfield Mosses, adding to the challenges for the Marches Mosses BogLIFE project team as they work to restore the peatland in this internationally important site and very rare habitat to a healthy, living state that will help to fight the climate crisis by storing carbon in the peat.

Why is ammonia pollution a particular problem for the Mosses? Peatlands are a very sensitive indicator of the overall health of the atmosphere around us all, particularly when it comes to ammonia pollution – they act as a “canary in the cage”. Indicators show up in very visible ways on the Mosses and threaten their survival. The impacts  range from the spread of excessive amounts of Purple Moor Grass on the bog that shade out more sensitive bog plants, loss of lichens and moss species, to unhealthy Sphagnum Moss bleached by the ammonia, to those Sundews that don’t need to catch insects any longer for their dinner.

Why are peat bogs so important? Peat bogs are formed by Sphagnum moss, the dominant, cornerstone species in peat creation. It creates acidic, nutrient-poor conditions that prevent plant decomposition and, therefore, promote the accumulation of carbon, keeping it out of the atmosphere. Acre for acre, peatland like Fenn’s and Whixall Mosses are better at storing carbon than any other type of habitat.

However, as the Purple Moor Grass spreads, it shades out the more sensitive bog plants particularly lichens and moss species , hurting the bio-diversity of the peatland. Also, this not only reduces the rate of new peat creation, it can even lead to the peat drying out and actually releasing carbon into the atmosphere.

By 2014, nearly all of the peatlands and other nitrogen-sensitive habitats in England were in receipt of  more nitrogen than they could effectively cope with from ammonia in the atmosphere.

You said the changes on the Mosses are a “canary in the cage” for the atmosphere. What else does ammonia pollution affect? It’s not just the peatlands that are affected. Ammonia is in the air we breathe and too much of it isn’t good for any of us. Ammonia pollution can travel long distances in the wind. When it combines with NOx it contributes to smog and can cause cardiovascular and respiratory diseases, and seems to be a contributor to asthma.  It is interesting to note that Whitchurch, which is close to the Mosses, is reported to have  the joint-highest level of asthma in England.*

What is causing these increased levels of ammonia in the atmosphere? According to Government figures he main contributor to atmospheric ammonia pollution is agricultural emissions.. These come from manure storage and use on fields, use of inorganic fertilisers, and dairy and cattle farming as well as intensive chicken farming.

What can we do about the ammonia pollution? DEFRA is working with farmers through the Code of Good Agricultural Practice (COGAP) for Reducing Ammonia Emissions 2018 to make sure they understand the problem. Through COGAP, farmers can learn about changes they can make to their farming methods to reduce the release of ammonia into the atmosphere.

The Meres and Mosses landscape was formed by retreating glaciers 12,000 years ago. Now, lowland raised peat bogs are one of the most endangered habitats… Read more