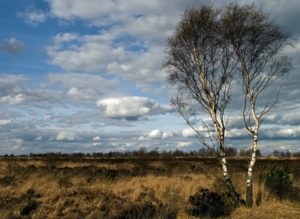 Work will soon begin to strip turf from fields adjacent to Fenn’s, Whixall and Bettisfield Mosses as part of the effort to turn the former scrapyard site into a haven for wildlife.
We have put together some answers to frequently asked questions about the works, which can be read below.

What is happening at the edge of Whixall Moss and on the former scrapyard?

As part of the Marches Mosses regeneration, we are going to scrape the vegetation from peaty fields near the edge of Whixall Moss, firstly, to recreate bog edge habitat and, secondly, to use the vegetation to cap the polluted areas on the site of the former scrapyard. We will restore these stripped fields back to bog vegetation to increase rare bio-diversity. Our work will not only stop further loss of peat but will re-start peat accumulation and carbon capture.

Why are you doing this work? Aren’t the fields fine the way they are?

The fields are deep peat and are part of the Site of Special Scientific Interest, some were open peat bog as recently as 40 years ago until that land was agriculturally improved. More recently some of the fields haven’t been farmed for over 10 years. Grazing the fields has become uneconomic.

When will the work begin?

We plan to begin in October and finish by the end of the January.

How deep will you dig in the fields?

Sounds like it will be make a huge mess!

Yes, there will be bare plots of land for a while. Visitors will be able to see the work when they walk along the main track from Morris’ Bridge onto Whixall Moss. You’ll also be able to see the regeneration process in action, as the plots are surrounded by peat bunding, begin to be rewetted with bog water and planted with Sphagnum moss. It will look a lot like the lines of the old peat cuttings on Whixall Moss.

How will you move the turf cuttings from the fields to the scrapyard?

We’ll work within the Moss itself, with dumpers moving from the fields direct to the former scrapyard site, without passing near residents’ homes or the visitor car park. We will make sure that we cause as little inconvenience as possible to anyone using visitor routes.

The Meres and Mosses landscape was formed by retreating glaciers 12,000 years ago. Now, lowland raised peat bogs are one of the most endangered habitats… Read more